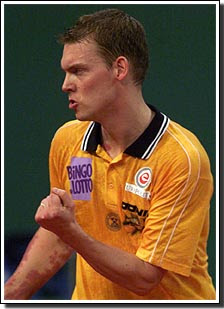 Peter Karlsson is in Indore to conduct a special training camp for Indian juniors. The training is being conducted by TTFI and Madhya Pradesh Table Tennis Associations at the World Class Abhay Prashal Stadium. The camp will go on for a week. A total of 10 coaches and 72 players are involved in this program. The sessions will be done on 24 tables consecutively. Karlsson was in Pune recently, where he conducted similar sessions.

Karlsson in a former European and World Champion. He is the brand ambassador of Stag, a sports goods manufacturer.


Karlsson praised the recent performance of Indian juniors and he thinks that Indian players can go a long way.
Posted by Menas Jagadish at 3:03 AM