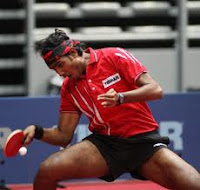 Sharath about to unleash his deadly topspin
Sharath Kamal definitely stands tall and belongs to the all-time greats of Indian Table Tennis players.
His seemingly laid back attacks combined with his tremendous reach and power are a force to reckon with. Even the very top players of the world now respect Sharath. He is at an all time high at the moment and we hope he continues to maintain his standard of play and reach higher.
Name: Sharath Kamal
Date of Birth: July 12, 1982
Club: San Sebastian de los Reyes
Coaches/Trainers: A Muralidhara Rao, A Srinivas Rao
Ambition: Best is yet to come
Achievements:
Winner, US Open 2010
Winner, Egypt Open 2010
Winner Commonwealth Games 2006, Melbourne
Highest World Ranking No. 39
Gold Medal at Commonwealth Championships at Glasgow
Pro Tour winner at Delhi
Represented India at Olympics
Arjuna Awardee
Multiple National Championship Winner
Posted by Menas Jagadish at 2:34 AM No comments: Links to this post 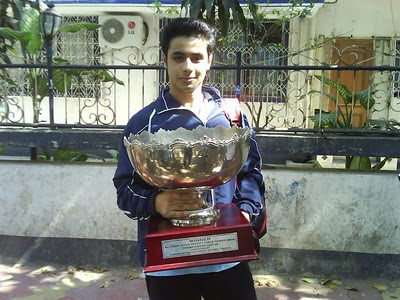 Aman with the Inter-University trophy 2007-08
Aman is probably one of the fittest players on the Table Tennis circuit. His full-blooded strokes aided by his fleet feet makes him stand apart from the crowd immediately.
Aman blossomed gradually and achieved success in 2009 at the senior level.
Name: Aman Balgu
Date of Birth: July 19, 1989
Club: Andheri YMCA, Matunga Gymkhana
Coaches/Trainers: Deepak Mani, Kamlesh Mehta
Ambition: To win a medal for India at the Olympic Games
Achievements:
Gold Medal at SAF Games - Team Event in 2009
Represented India at the Asian Championships
Silver Medal at Senior Nationals in Team Events 2009
Gold Medal - All India Inter-University 2009
State Champion - Youth and Men's Singles at Sangli 2009
Hobbies: Playing many sports, Catching up with friends, and Music.
Posted by Menas Jagadish at 12:36 AM No comments: Links to this post

The August ratings for the top players of Maharashtra are out. The big move is by Aniket from 2360 to 2395 owing to his performances at the State tournaments this season. Sanil too has cemented his position at the top by stellar performances at the National level and the Indian open. Balgu has disappointed so far but we expect a lot from this youth.


The big mover in the list is Martand Biniwale, who has played beyond his expected rating and has jumped right behind Rohit Chaudhari. If he continues to produce results that he has displayed this season, he could easily challenge the top 6. This youth is the one to watch for sure!


Most of the others retain their ratings since they have played to expected strength.
Posted by Menas Jagadish at 11:29 AM No comments: Links to this post