Xu Xin is the World No. 1 Table Tennis player 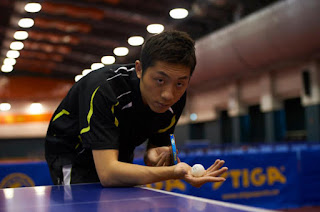 Charismatic left-handed Chinese Table Tennis player, Xu Xin is the new World No. 1 in Table Tennis. He has leaped places to occupy the pride of place in the January World Table Tennis Ranking list published by ITTF.

Xu won many points by taking the Grand Finals title and also earned handsome bonus points, without which it would not have been possible to overtake the World and Olympic Table Tennis Champion, Zhang Jike. It may be recalled that Xu Xin attended the London Olympics, but only as a P-card holder. His results seemed subdued just before and after the Olympics, probably partly due to the disappointment of not being chosen in the core team (eventually Zhang Jike, Wang Hao, and Ma Long). However, the spectacular event seemed to have done good to his motivation and he is now back in action. Critics attribute his recent success to playing more near the table. He beat veteran Wang Hao in the Grand Finals.

Xu Xin's best performances so far have been the World Tour (formerly called Pro Tour) events, where he has already amassed titles and is closing in on the round number 10. Other than this, he has Gold medals in the Team and Doubles at the World Championship level.

Xu Xin endorses the Stiga brand of Table Tennis equipment and has a couple of impressive videos produced by the company, which you can watch here:


Yes, stylish indeed! He reportedly uses a Stiga Rosewood as his blade and Stiga Calibra LT for his backhand and DHS Neo Skyline TG3 for his forehand.

Xu Xin (was born in Jiangsu, China on January 8, 1990. Although he is just 23 years old, he has spent considerable time in the Chinese squad.

His name in Chinese simplified is 许昕, and traditional 許昕

Posted by Menas Jagadish at 2:10 AM