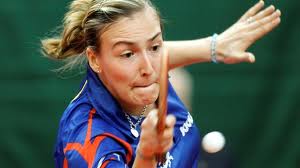 Table Tennis has lost a bit of support from UK sport as players prepare for the 2016 Olympic games at Rio de Janerio. Other sports that suffered are Basketball and Wrestling. The big gainers in percentage terms were Boxing, and Gymnastics. Rowing received the highest funding followed by Cycling, and Athletics.

Since UK Sport funds athletes who are likely to win medals and there was sharp focus on Table Tennis players' performance, it is not surprisingly that they took this decision. Here's hoping that the younger players prove their detractors wrong, work hard and get into medal contention at least for 2020.
Posted by Menas Jagadish at 11:16 PM