Ping pong, Table Tennis strategies that you can use on the Table 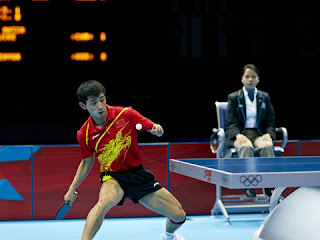 A Ping Pong or a Table Tennis Strategy is an overall plan on how you must play against a particular opponent under specific conditions. This must not be confused with Ping Pong or Table Tennis tactics, which are much more detailed means of achieving the end goal, which is detailed by the Ping Pong strategy. If you do not go to a match with a strategy, you are battling against yourself.

When you watch World Class players, you probably feel that they are just trying to hit hard all the time, and there is no match strategy. Well, this observation cannot be too far from the truth. It is a well known fact that the Chinese trainers and coaches dissect their opponents' game to such an extent, that a detailed strategy is made sometimes months before an important competition. On the other hand, weaker players watch the top players and they themselves are unknown to the stronger players, which can be an advantage. For example, an almost unknown player, Kiril Skachkov, kept attacking Ma Lin's forehand (which everyone assumed was a huge weapon) with a backhand topspin down the line. Ma Lin could not adjust to this strategy and ended up with an embarrassing loss. This example shows that if you study your opponent's weakness, you can tackle players much stronger than you.

A Ping Pong (formal name of the sport is Table Tennis) strategy must be designed to use your own strengths or advantages, while minimizing deployment of your weaknesses and at the same time, exploit the weaknesses of your opponent. How is this done? Well, have you seen older players effortlessly beat back younger players when they don't even seem to have the right technique? How do they do it? Well, they are devising strategies even when they are warming up against an opponent they've just met. Measuring up the players strength and identifying weaknesses is a learned art for such old or experienced players. They make mental notes and execute them to the T, earning points in a bunch. Even after a match has started, their brain does not stop ticking, and they keep adding points to their mental notebook. The points that experienced players observe are not only technical, but also can be behavioral. For example, is my opponent over-confident? is he nervous? giving too much respect? agitated? The strategy is then deployed and more often than not, success is achieved.

So, how can you come up with your own strategy? Well, this varies a bit from person to person, but here are some hints that you can take in the following areas:

Focus on returning serve well, and only on service practice. Get hold of a trainer or a good server and practice. Try to incorporate the latest technology. For example, the backhand topspin return of services even from the forehand side. For example, Zhang Jike does it persistently. This is not an easy stroke, you need to keep working at it. Other service return methods is quick turn and forehand topspin hits for anything that is likely to come outside the table. Again, this is to be practiced before putting into play more often.

Service Practice - Spend at least 1-2 sessions a week during season and at least one session in 2 weeks during off season serving. Try to add at least one new service every 3-4 months, drop ineffective serves and use successful ones more often. Do not touch your 3-4 core servies though.

Read the spin on the ball well. This is highly underrated and more often than not, the leading cause for losing matches. This weakness is most often found in new players or players who do not train with professional or semi-professional Table Tennis players. It is very common to find players hitting blocks out of the table again and again without getting a clue as to why this is happening. Experienced players know that blocking high spun balls is easy only if the wrist is firm and there is no movement of your hand while making contact with the ball.
To improve reading of spin on the ball, paint the ball in a pattern, which can be observed even when the ball is moving and spinning. Many trainers use this method to teach their young players to spot the spin.

Example: Player A is aggressive, hits excellent 3rd ball attacks, is impatient, does not like to engage in lengthy rallies. His backhand is relatively weak, and he is turning even from his backhand to hit forehand strokes.
Strategy for play by Player B against Player A:

1) Receive Player A's serve deep, blunt out 3rd ball attack as much as possible. If possible, place the return near the net to extreme backhand, where it is suicidal to turn and hit the ball. If Player A does hit such a ball, be fully ready for a block and place it to the far side of Player A's forehand. If Player A does reach the ball, it is likely to be a lob or a pop, easy to finish.
2) Slow down rallies by receiving short, at times, block multiple balls to show your control over his attack (assuming your blocking is good). Try to push the ball 3 to 4 times, by which time, the aggressive Player A is likely to hit a desperate shot more often than not.
3) If you find that you are in good nick on that day (sometimes it shows even in practice while knocking before the match or early in the match), then launch your own attack and put Player A in defensive mode.

Note that the strategy for hardbat or sandpaper Ping Pong differs a bit compared to a faster, pips-in kind of Table Tennis. The spin on the ball in this case is hardly evident in this case. Usually, strategy for hardbat Table Tennis takes a lot of time, which is why you see very old players succeeding and beating younger players handily.
Posted by Menas Jagadish at 3:09 AM