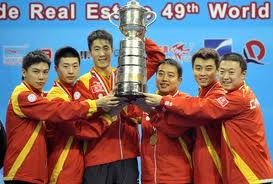 In it's quest to develop relations with the fast growing China, Dubai has announced that it will sponsor the Chinese National Table Tennis team. It hopes that this will bring Dubai and China closer and will allow both parties to explore opportunities. Mattar Al Tayer, Vice Chairman of Dubai Sports Council met Chinese Table Tennis officials in Beijing and finalized the deal.


Currently, the top 4 ranked players in the World are all Chinese. When Dubai hosted a Pro Tour Table Tennis event in 2011, several of the top Chinese players, such as Ma Long, Ma Lin, Wang Hao, Wang Liqin participated. The same was the case at the World Team Table Tennis Cup in 2011.

John Ferguson, Chairman of Falcon and Associates, who facilitated the meeting reportedly said that Dubai's support of Table Tennis, a very important cultural factor, will go a long way in improving business and cultural ties. It is fascinating to note that in 2011, hundreds of thousands of Chinese tourists visited Dubai. Also, Dubai has a significant population of people with Chinese origin. China is Dubai's 2nd largest trading partner.
Posted by Menas Jagadish at 11:25 PM