Ariel Hsing is the Youngest ever US Table Tennis Champ 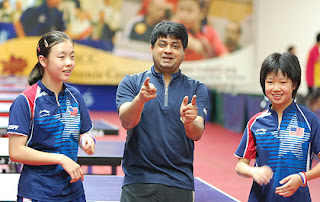 Ariel Hsing became the youngest ever US Table Tennis Champion. She beat Lily Zhang in the finals. Ariel also won the U-21 Women's title.

Titles in the junior and cadet girls was the consolation for Lily Zhang.

Both Ariel and Lily train at Rajul Seth's ICC at Milpitas, California. Timothy Wang, the Men's Champion from Texas also attends camps and private training sessions at the ICC.
Posted by Menas Jagadish at 1:22 AM