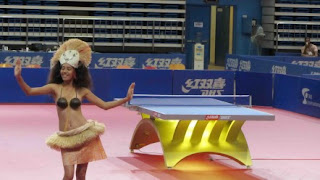 In the absence of Michael Brown of Australia, Wang Qi of New Zealand is the favorite to win this year's title. Others who are expected to give the favorite a run for his money are Lal, Peter Antonia, Zhang Bei Yan, and Lou Gou Gin. Yoshua Shing also is competing and will be in contention.

Michael Brown and Wang Qi facing off at the 2010 Fiji Open:


A total of about 70 participants are expected to play, said the tournament organizing committee member, Christopher Lal.

Another aspect of the tournament is the participation of players in training, where members from Nauru, New Caledonia, Australia, Ba, Lautoka, Nadi Suva, Nausori, and Lami will take part.


Editor
Posted by Menas Jagadish at 5:40 AM