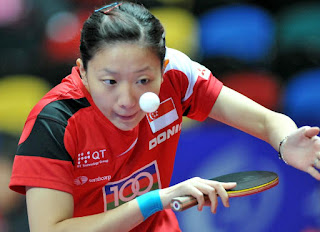 Li Jiawei is a medallist at the Olympic games in 2008 and 2012. She was also a key member of the women's team that beat mighty China in the World Team Championships at Moscow in 2010. Her other achievements are multiple medals (including gold medals) at the Commonwealth Table Tennis championships and games.

Li Jiawei became a Singapore citizen at the age of 18, a couple of years after being spotted by Singaporean talent scouts, who offered to train and later retain her under the Foreign Sports Talent Scheme.

Li Jiawei was ranked as high as No. 3 in the world at one time and was 21st at the time of retirement. Sun Bei Bei, another star Singaporean Table Tennis player also announced her retirement. The Singapore Table Tennis Association made the announcement at Toa Payoh.
Posted by Menas Jagadish at 3:29 AM