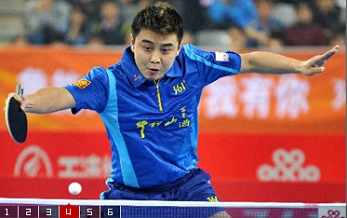 Wang Hao is still playing as much as he can in the Chinese premier TT league even after losing out on a gold medal on his third attempt. Zhang Jike praised big brother Hao right after he won the Gold. Liu Guoliang too showered praise.

If anything, Wang Hao's won more fans even after losing. Evidence - the Chinese media going ga-ga over a hit of a streak of golden hair!

Posted by Menas Jagadish at 3:27 AM