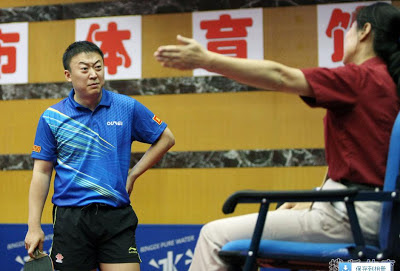 Super star Table Tennis Player Ma Lin was pulled up for a fault in the Mixed Doubles event while receiving service!

We do hear many instances of players being faulted while serving, but while receiving? The umpire claimed that Ma Lin's right hand (yes, the playing hand), touched the table surface.

The argument lasted for quite a while and Ma Lin was furious. Another judge intervened but there was no change. After the match, Ma Lin was repentant and said that he should have calmed himself down as he had been pulled up many times for service faults. And tongue in cheek he said "I should analyze and improve my receiving"
Posted by Menas Jagadish at 7:39 AM