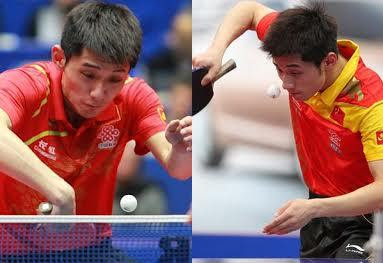 We all know that the all time great Table Tennis player Zhang Yining enrolled for English lessons in the United states last year. Now it's Zhang Jike's turn to learn the language. Is he inspired by Zhang Yining? Unlikely but possible. After all, he is one of the very few to have won the Grand Slam of Table Tennis, Zhang Yining is one of them. Liu Guoliang, Kong Linghui, Wang Nan are others who've done it.


Jike has just ended his honeymoon after the Olympic Gold medal, traveling around the country, attending events and giving hundreds of interviews. He is just back into training mode again and enjoying it, although it took a toll on his mind and body a few weeks back. He was not able to even win the national title although he did express his satisfaction at the semi-final appearance. It is another matter that he thrashed the same youngster Zhou Yu that he lost to in the Chinese Premier League just a few days later.

A short film was reportedly screened in which an English teacher asks questions in English. Jike shows his eagerness to learn the language in that film. So, what are Zhang Jike's reasons for his urge to learn English? Well, quite a few reasons according to the World and Olympic Champ. The main one, he says in the Women's final at the Olympic Games at London, Ding Ning was repeatedly warned and she was unable to communicate with the umpire Paola Bongelli, but vented her anger after the match. Jike mentioned several such occurrences in many International tournaments and said that he is eager to quickly pick up spoken English to deal with such tricky situations.

Zhang Jike said that he is now in familiar territory - training, training and more training. His grueling post-olympic routine has come to an end and he is relieved that it is over. Zhang Jike is currently busy with his matches at the Chinese Super League where he represents Shandong. His coach there encourages him to skip social activities and guest appearances as much as possible. The strength and conditioning coach of the National team has also started concentrating on building back Jike's confidence in those areas. Jike is using the league matches to get back into the groove. He already has wins over Ma Long, Wang Hao, Joo Se Hyuk, and Zhou Yu to show that he is right on track. Analysts are observing a discernible increase in confidence after London. Zhang Jike agrees.

Posted by Menas Jagadish at 1:13 PM