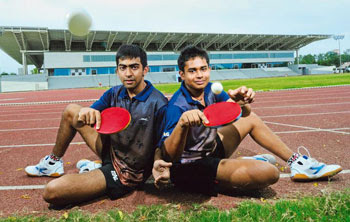 Harmeet Desai made India proud at the Brazil Open World Tour tournament. He won the Boy's U 21 beating Cedric Nuytinck of Belgium in the finals. Soumyajit Ghosh was the top seed, but he lost to Harmeet in the Semi-finals.

Soumyajit, however, did not let the loss affect him as he reached the Quarterfinals of the Men's Singles!

It was a good show by most players from India as they reached the Main draw.
Posted by Menas Jagadish at 1:20 AM