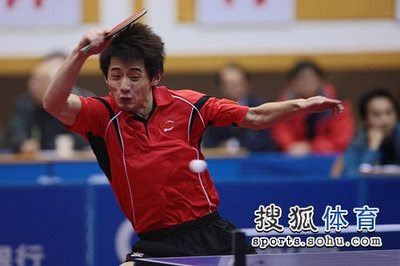 Zhang Jike beat Wang Hao 4-2 to win the World Table Tennis Championship 2011 title at Rotterdam. Wang Hao did not go down without a fight. He saved 6 match points.

In a high-quality match that provided thrilling moments to the enthusiastic crowd, Zhang seized his chances at crucial moments to seal the deal. Zhang appeared to be more focused during the entire match.
The final score read 12-10, 11-8, 6-11, 9-11, 11-5, 14-12.
Wang was a bit uncharacteristic early on in the match and let the first game slip from his hands when he had a chance to clinch it.
Wang Hao had dominated the proceedings during the tournament, except for the match against Ryu Seung Min and hence he was the clear favourite. But Zhang had other ideas. He made the most of the opportunity by winning the title on his very first opportunity.
It is well known that Zhang is in and out of favour with China's chief coach, Liu Guoliang. This must be an especially sweet victory.
Posted by Menas Jagadish at 12:03 PM