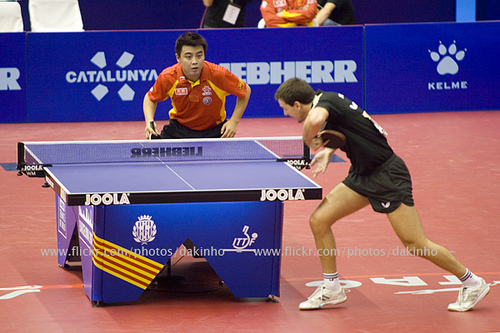 Wang Hao and Timo Boll in action in an earlier tournament.
The highest ranked players registered wins to reach the last 16 stage of the 2011 World Table Tennis Championships at Rotterdam. Among them were Wang Hao and Timo Boll in the Men's Singles and Li Xiaoxia and Guo Yan in the Women's section. Later, Top seed Wang Hao moved to the Quarterfinals but not before surviving a scare from his nemesis, 2004 Olympic Champ, Ryu Seung Min.

In doubles action the Indian teams made their exit from the Men's, Women's, and the Mixed doubles events in the first rounds. Commonwealth champions Sharath Kamal and Subhajit Saha could not weave their magic this time around and went out after a brief struggle against their Korean opponents.
Posted by Menas Jagadish at 9:07 AM