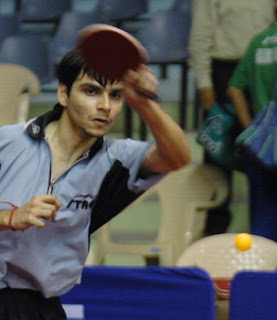 At first glance, you'll never guess that Jubin is a star player. You'll be forgiven for making that grave mistake because of the sheer humility Jubin personifies.
The moment you see him on the table, he is a different being altogether. Playing with amazing timing and elegance, Jubin steamrolls opponents into the ground. Add to that the fact that he is a left-hander and you can't but admire his game.
Jubin was always in the shadows of his more famous peers until he won the Youth crown. A win over Sharath sent him to another league and his confidence soared. The exposure to international play owing to his consistent domestic performance, meant that Jubin leapt over others that had outshone him earlier. 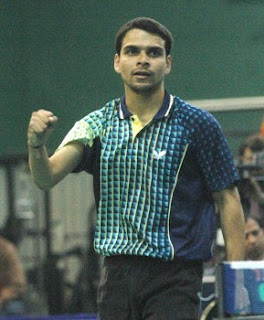 Jubin's only bitter moment came when he was dropped out of the ongoing Commonwealth games. Many truly felt that he easily deserved to be in the team because he was consistently top ranked the year before. The selectors probably played it safe and went for experience.
We are pretty sure that Jubin will bounce back with a vengence and move up and higher even faster. He is currently playing in the Spanish league, an experience that will only help him to conquer all that he wants.
Name: Jubin kumar

Coaches/Trainers: Many coaches helped me to improve.

Ambition: To play good and To win medal for country in major tournaments

Major Achievements:
Posted by Menas Jagadish at 10:31 AM