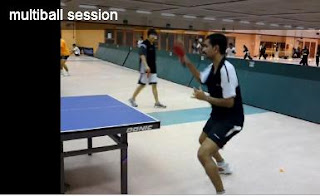 Uday in a multiball session at his University in Singapore
The humble and somewhat shy Uday is reluctant to be compared to Bona Thomas John (one of Karnataka's great TT players). Bona blossomed relatively late. Who knows what Uday could have achieved if he had a chance to continue playing seriously.


The good news is that he has started training in his University. Although Uday is very clear that he is playing only for fitness, we secretly hope that he goes on to achieve something that he dreamt of earlier in his career.

Ambition: Was to represent India internationally (but he hints that it is on the back burner for now)

Best Tournament Result: Winner of All India Inter-banks
Posted by Menas Jagadish at 11:27 AM