TTFI moving up the ATTU and ITTF ladder 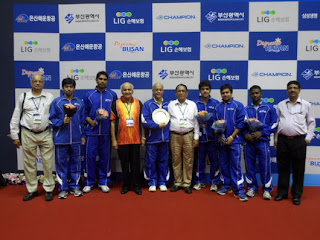 India's clout in the World of Table Tennis is increasing exponentially.

It is worth noting that Dhanraj Choudhary was recently elected to the Board of Directors of ITTF at the Paris World Championships venue.

Ganeshan Neelakant Iyer, who has proven his mettle by conducting several international events as chief referee in India as well as abroad, was nominated to the Technical Committee as a full member.

These developments are very important for Table Tennis in India
Posted by Menas Jagadish at 12:55 AM