Mayor Nutter beaten by an eight year old, but it's no shame 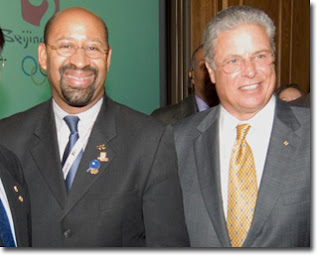 The Mayor could score only three points against the kid, who is no pushover. Amy is the US Champion in the under nine category.

The club is already growing in popularity since it's unofficial opening in January. Around 25 TT players compete during the week. Table Tennis lessons, tournaments, and private parties are the offerings made at the club.
Posted by Menas Jagadish at 12:21 PM