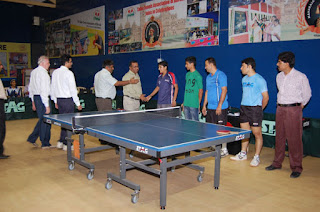 Kalpesh Thakkar Honorary Secretary of TTAB informed that the association has requested TTFI to appoint Korean coaches at the TTAB stadium at Vadodara (Baroda) so that players from Gujarat can benefit.

Kalpesh observed that foreign coaches have contributed significantly to Table Tennis in India at various locations. Notable among them have been An Jong Son and Kim Song Han.
Posted by Menas Jagadish at 12:49 AM