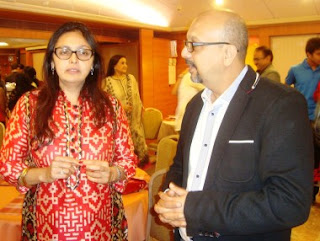 A press conference was held at the Le Meridien, New Delhi to announce a league for Table Tennis in India.

The league will be held from May 28 to June 12, 2016. Both TTFI and ITTF have approved the event. 11even sports will back the event financially. The franchise owners will be finalized in the coming months. Vita Dani and Kamlesh Mehta will be the main people driving the league.

The league will see participation from eight teams in which foreign players, including Chinese players will be exhibiting their skills. India's national Champion, Soumyajit Ghosh seemed excited about the event being announced and is looking forward to it.
Posted by Menas Jagadish at 11:54 PM