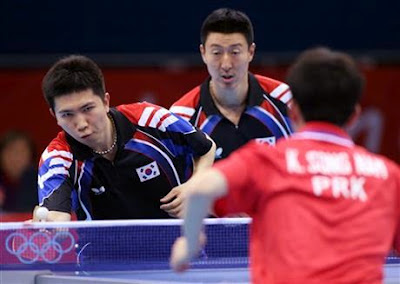 It took Ma Long's power for China to advance to the finals of the Team event in the London Olympics because Timo Boll upset the newly crowned Olympic Champion, Zhang Jike. Ma Long beat both Ovtcharov and Bastian Steger. The Chinese doubles pair beat the Germans in between.

In the other semi final, Korea beat Hong Kong quite easily, although they faced resistance in a couple of the matches. Experienced Ryu Seung Min played the strong man in that encounter. So, it was the players who did not compete in the Singles event, who played the main role.

The finals will be played tomorrow. In the women's finals, China faces Japan, who beat the ultra strong Singapore team 3-0!
Posted by Menas Jagadish at 3:32 AM