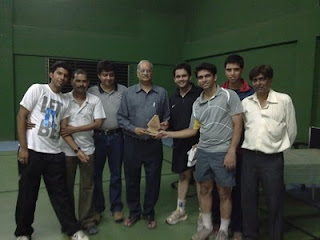 Rohit Chaudhari of Deccan Gymkhana was the hero of the day at the finals of the Inter-club Table Tennis championships held at Solaris Club.

Chaudhari earned two wins for Deccan, while his team mate completed the win by winning the deciding rubber in a facile manner. Shubhankar Ranade had provided some respite by beating Kunal Tilekar in the 3rd rubber. Deccan thus won the match 3-2.

The keenly anticipated match of the day was Rohit Chaudhari vs Bhushan Singh Thakur. Thakur is an ex-international player. But the day belonged to the accurate play of Chaudhari. Thakur could offer only token resistance in a match that was dominated by Chaudhari but punctuated with thrilling rallies. The only point at which Chaudhari faced resistance was at 6-3 in the 3rd game. Chaudhari relaxed his grip to allow Thakur to make a come back. Thakur won the game after saving a match point down 9-10.

The fourth game was a complete rout. Chaudhari led 9-0 and eventually won the game at 11-3.
Posted by Menas Jagadish at 10:44 PM