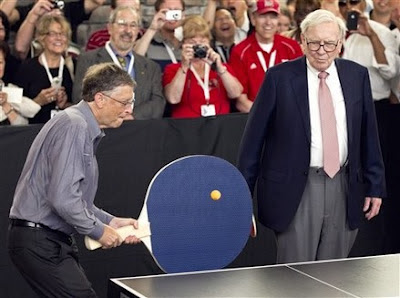 Tech genius, Bill Gates, indirectly made sure that the world media's attention was firmly focused on Ping Pong player Ariel Hsing of the USA. Bill follows Table Tennis along with his close pal, Warren Buffet.

Ariel advanced to the round of 32 after beating Silva Yadira of Mexico 4-0 and then upsetting Ni Xialian of Luxemburg. Xialian is a former world champion, now a veteran. The win was quite unexpected. The biggest achievement for Ariel was troubling the no. 2 seed, Li Xiaoxia even though she eventually lost 2-4. Ariel won a lot of hearts and in particular Bill Gates' heart, who was thoroughly impressed with her performance.

Ariel plays at the ICC in Milpitas under the watchful eyes of Rajul Sheth.
Posted by Menas Jagadish at 9:40 PM