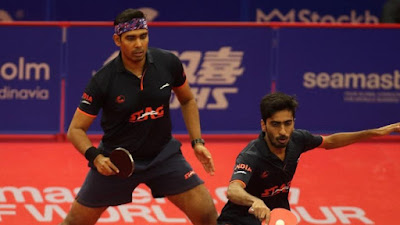 Harmeet Desai will start his match at 6 PM (Geelong time) at the Seamaster 2018 ITTF World Tour Platinum Australian Open at Geelong. Sathiyan and Sharath will play their matches next followed by Manav a little later in the day. Sanil and Amalraj have already played their first matches yesterday. Sharath and Sathiyan have relatively easy opposition while Manav faces the formidable Maharu Yoshimura.

In the Women's singles, India's star player Manika Batra plays her match tomorrow. In a bizzare pairing, Sutirtha Mukherjee will face off against Ayhika Mukherjee in a group match. Bizzare because they've traveled thousands of kilometers to play at the Australian open from their home where they live just some kilometers apart! Pooja Sahasrabuddhe Koparkar won her tough group match earlier.

Photo courtesy of the ITTF. Only for representational purposes.
Posted by Menas Jagadish at 12:09 AM