Anthony Amalraj to be given Arjuna award 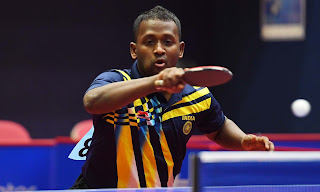 A Amalraj, who won the 2012 Indian National Championships, will be rewarded with the Arjuna Award for his accomplishments in his career. Amalraj has performed consistently from around 2010 at the international level and this news comes at around the right time.

Other International achievements by Amalraj are as follows:

Winner of Men's doubles silver medal at the 2014 Commonwealth Games at Glasgow (partnering A Sharath Kamal). Winner of Bronze medals in team and mixed doubles at the 2010 Commonwealth games.

Winner of Gold medal in the Commonwealth Championships in 2015. Also, silver in men's singles and bronze in men's doubles. In the 2013 edition, he won a silver in the team event.

Photo courtesy of the ITTF.
Posted by Menas Jagadish at 12:14 AM