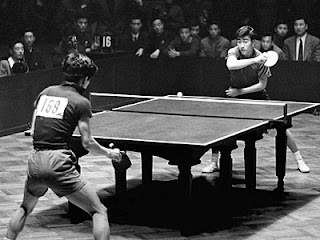 Zhuang Zedong, one of the heroes of the famous "Ping Pong diplomacy" between the United States and China, died on Sunday. He was 72. Zedong was battling against Cancer for almost five years.

Zedong took the first step towards the eventual Ping Pong diplomacy situation one day at the Nagoya World Table Tennis Championships in 1971 by offering a gift to Glenn Cowan of the USA, who had missed the official bus. The gesture was photographed, and eventually led to President Nixon's visit to China. Before this, the American team was invited to China for a Ping Pong match. All this helped thaw relationship between China and US during the cold war period.

Zedong was married to a Japanese woman in the late 1980s.
Posted by Menas Jagadish at 2:41 AM